​Help our local Forests and their inhabitants!

Volunteers are needed for a pilot project, We R 4 Butterflies, in the San Bernardino National Forest near Lake Hemet. Local well-known butterfly specialist, Dr. Gordon Pratt, is working with the U.S. Forest Service to restore habitat that has burned in recent wildfires.

The first stages of this project will begin in the Spring.

Removal of invasive plants and native seed collection will be the first tasks.

Seed collection trips will be continual, and finally seed planting will occur.

This will happen over the following months and into next Fall.

Volunteers will be provided with all equipment. We will spatially distance and all must wear masks.

Save the monarch butterfly - from LA Times Article March 10, 2021

I t wasn’t so long ago that orange clouds of monarch butterflies would descend upon the California coast every winter. The western population of the majestic butterfly spends the cold months in groves of trees between Marin County and San Diego.
In the 1980s, there were millions of monarch butterflies wintering in California. Counts in 2018 and 2019 found only around 30,000 monarchs, less than 1% of the population’s historical size. In November, volunteers counted just 2,000 .
Habitat loss, pesticide use and climate change have whittled down the monarch butterfly population nationwide, but monarchs west of the Rocky Mountains have been especially hard hit. There’s a very real possibility that the western population could disappear. Yet despite the dire situation, monarch butterflies do not have endangered-species protections.
A Sacramento Superior Court judge ruled last year that insects couldn’t be protected under California’s Endangered Species Act. The state is appealing, but the Legislature may need to make clear that butterflies, bumblebees and other insect species are eligible for state protection.
Conservation groups sought to add monarch butterflies to the federal list of threatened and endangered species in 2014. In the final months of the Trump administration, the U.S. Fish and Wildlife Service decided that while the butterflies meet the criteria for listing, they weren’t a high enough priority to be listed yet. The Biden administration should reconsider that decision.
How much longer can authorities afford to wait? The Fish and Wildlife Service has given the western monarch population a 96% to 100% chance of collapsing within 50 years. The population east of the Rocky Mountains has also declined dramatically; there is an 80% chance the eastern population could collapse in the same period.
The challenges facing monarch butterflies are many, but they are not insurmountable if there is an ambitious, coordinated effort to protect them. That means encouraging property owners to plant milkweed, the only plant monarch caterpillars eat. It also requires limiting the use of weedkillers that destroy the monarchs’ food supply and insecticides that threaten pollinators, including butterflies and bees.
California has an even greater responsibility to act. Researchers think the precipitous drop in the western monarch population is largely due to the loss and damage of the butterflies’ winter habitat. Coastal communities must protect the groves of trees that monarchs rely upon. When trees have to be felled, they should be replaced. Property owners can plant native flowering plants and milkweed and stop dousing gardens with pesticides.
It’s inexcusable to allow such an iconic species to dwindle before our eyes. Monarch butterflies deserve immediate protection.

I would add that the accidental introduction of the oleander aphid is playing a role in population loss.  Many of the milkweeds in the desert are covered with these aphids.  These milkweeds use to have many monarch caterpillars on these milkweeds in California.  These aphids often completely cover the locations female monarchs place their eggs.  I never see eggs on milkweeds that have many of these aphids.  I would recommend eliminating these aphids on your planted milkweeds.  I just take leaves, buds, and branches and run them through my fingers over them squishing them as my fingers move.  My fingers often turn yellow from the squishing of these aphids.  I suppose I could wear gloves to use this method.  Spraying them with water is somewhat effective, but those aphids that are sprayed off if they fall directly below the milkweed will just crawl back up the plants.  These aphids reproduce parthenogenetically by coming out the back of the female aphid as a fully formed tiny aphid.  It is for this reason these aphids can reproduce extremely quickly.
Cheers,
Gordon 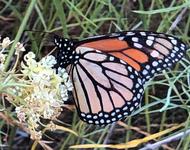 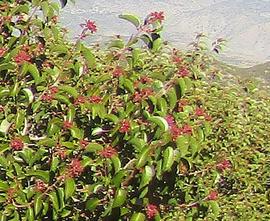 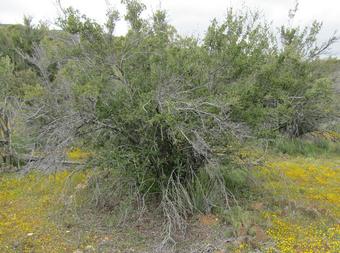 Birch leaf mountain mahogany (Cercocarpus betuloides) is a fairly common chaparral tree.  The small white flowers of these trees are not good nectar sources for butterflies and other insects, but are probably used by some specifically adapted insects.  The mountain mahoganies form a distinctive feathery seeded fruit that aids in their dispersal and formation of new mountain mahoganies.  In the Anza area this mountain mahogany burns so frequently that they rarely get over 10 feet tall.  But when protected from fire these trees can get large; for instance a tree I found in San Bernardino had a trunk around 2 feet in diameter.  The wood of this tree is very hard and colored like mahogany, which is why this genus is called mountain mahogany. It is a member of the rose family (Rosaceae) and not actually a member of the mahogany family (Meliaceae).

A small rare saturniid moth (Saturnia albofasciata) also uses birch leaf mountain mahogany as a caterpillar food plant.  This moth is found largely outside of the marine layers that form in fall through spring.  There are many other moths that use mountain mahogany as a caterpillar food plant.  These moths include Sphingidae (Sphinx perelegans), noctuid moths (Oncocnemis species, Bertholdia trigona, Acerra normalis), geometrid moths and many microlepidoptera.  The insect herbivore diversity on this tree makes it a good source of nutritional resources for birds and other insectivores. 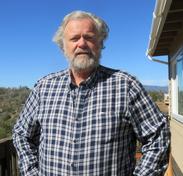 I really want people to understand the environmental values of different plants.  Sugarbush is one of the best trees for nocturnal roosting for birds.  I have favorite sugarbushes on my property that are used by hundreds of quail every night.  As the sun sets the quail gather in these trees and I can hear them squabble over positions in the large bushes.  They use the same trees each night.  Some nights the quail will wake up and argue with each other.  Photos of bush are above.

Sugar Bush (Rhus ovata) is a xeric adapted sumac in the cashew family.  The white flowers which bloom in spring are highly sought after by many butterflies.  The sweet edible fruit are enjoyed by California sister butterflies (Adelpha bredowii) in early to mid-summer, which is interesting since this butterfly rarely if ever visits flowers.  Because of the dense foliage and large leaves of this sumac this bush is favored by many birds including quail for nocturnal roosting. 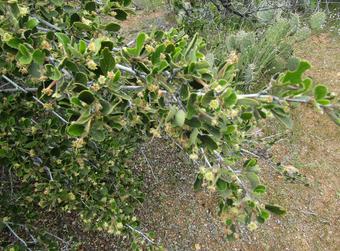 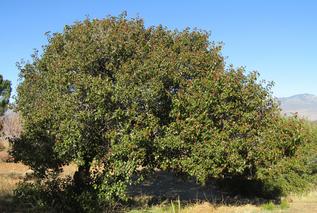 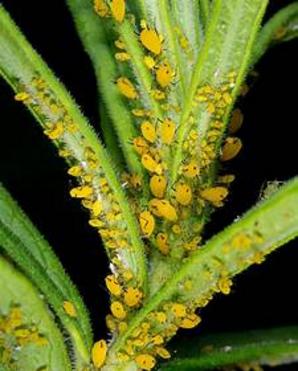